Hammer’s sequel to Quatermass 2 (1957) earns most of its stars through a warped and imaginative conclusion; the closing scenes of this wordy film demonstrate surprisingly eerie imagination—finally showing us something wordlessly (and exquisitely) weird.

But before that: Professor Bernard Quatermass (Andrew Keir) is summoned to help investigate a mysterious metallic shell uncovered during tunnel repairs to the London Underground. He extracts from within some big crusty bugs—perfectly preserved fossils—that he deduces are ancient Martians. Naturally the authorities won’t have a bar of it, and hinder his every step. Meanwhile the craft itself begins acting up, hurtling nearby objects and inducing madness in a few of its meddlers.

Diverging from iconic Hammer fare in its modern, urban setting, the film is a rather low on atmosphere early on, focusing primary on the Professor’s inquiries being stymied by obnoxious officials. Given the innovative Underground setting, one thinks of the missed opportunity to play on this more fully (perhaps using a few haunted-house conventions to evoke a uniquely urban sense of the uncanny). Moreover, the earliest strange happenings (objects levitating near the craft) are disappointingly explicable—by visible wires. 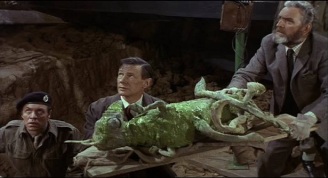 The pace quickens after the plot has been rather exhaustively unpacked (an explanation involving local legends, ancestral memories, psychic powers and alien ethnic-cleansing). Then we get what we’ve surely been waiting for all along: quakes and chaos emanating from the Underground to threaten busy London above. Most effective is the film’s attribution of a sense of the ‘demonic’ to its ultimately extra-terrestrial menace.  Once this note is resoundingly struck, the technical mumbo-jumbo of science-fiction seems left behind, allowing us to be held and haunted by the film’s final spectacles of terror.  3.5 / 5

Dominic Lennard is a writer and academic from Tasmania, Australia. View all posts by Dominic