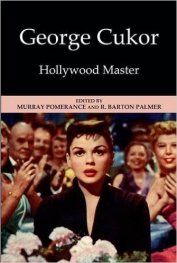 I’m excited to announce publication of George Cukor: Hollywood Master, edited by the wonderful Murray Pomerance and R. Barton Palmer, in which my work is included. This anthology includes critical discussion of every feature Cukor directed, including Gaslight, Adam’s Rib, Born Yesterday, and of course numerous others.

A number of George Cukor’s films focus on the critique and correction of social personae, featuring protagonists who must fuss over the most “appropriate” or culturally desired presentation of self. Addressing this theme, my chapter is titled “Libel, scandal and bad big names: on not being ‘yourself’ in Camille (1936), Romeo and Juliet (1936), It Should Happen to You (1954), and Les Girls (1957).”

vide innumerable fresh insights into Cukor’s rich and surprisingly varied career, his working methods and his signature subjects. The self-effacing Cukor believed in not calling attention to his craft, but he would have appreciated the sophistication and nuance with which these scholars illuminate his achievements.

Dominic Lennard is a writer and academic from Tasmania, Australia. View all posts by Dominic